Whiskey Boris and I were recently interviewed for a blog written by the amazing Ashley Schwellenback, who is set to publish her third fiction novel, and, better yet, has two cats she adores. Her personal blog is Jane Eyre Likes Cupcakes http://bit.ly/1Q6TD5F

The Interview
Journalist, blogger, and buddy Theresa Marie Wilson—who was my very first editor in my first job out of college more than a decade ago, by the way—maintains a 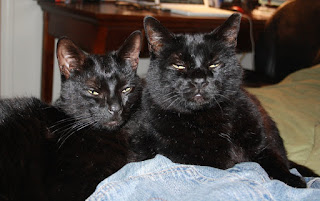 hilarious and poignant blog about the joys and misadventures of life with her two black cats Whiskey and Boris. I asked her, Whiskey, and Boris to answer some questions for me and highly encourage anyone interested in cats, humor, nuns, and animals in general to subscribe to her blog. She also happens to be working on her first novel (as if wrangling these boys wasn’t enough).


What is Cat Noir CC?
CatNoirCC.com follows the adventures of two cats, Whiskey and Boris, and their human, whose name hardly matters. It is a humorous blog dedicated to increasing awareness and adoption rates for black cats. Our slogan is “every color deserves a forever home.”
I currently have two black cats and it seems like at least one family member has always had one. Whiskey is 13 and is rather, I shudder to use the word grumpy because that other cat has cornered the market, but let’s say indifferent in a loving way. He weighs in at about 22 pounds, which I attribute mostly to his large, square head. Boris is 2 and doesn’t have a mean bone in his body, needy and whorish when it comes to attention, yes, but not mean.

Where did the idea behind Cat Noir CC come from?
Black cats and dogs can languish in a no-kill shelter cage longer, or be euthanized more readily in shelters, than their colorful counterparts mostly because of the stigma that surrounds them.

Cat Noir CC shows that black cats are simply cats. They do not come with any inherent negatives that some people who linger too long in the shallow end of the gene pool associate with them such as bad luck, witchcraft, or satanic ritual. Last year there was a survey that said black cats aren’t as popular because they don’t photograph well in selfies. When half your ass is visible in the bathroom mirror behind you in the photo you took of your best duck face, I’ll take a black cat selfie any day.

What about the name Cat Noir CC?
Originally, the site was going to be called “Home of the Deconstructionist Cat” because Boris has left behind an extensive trail of broken household items from cell phones to a food processor, but there was that whole deconstructionist theory associated with French philosopher Jacques Derrida and, let’s face it, cats don’t understand the French.

Do you consider yourself a crazy cat lady?
I’m medicated, but I do carry on entire conversations with my cats and often try to reason with them. Is that crazy? I have a book called Crafting with Cat Hair, but my brother gave it to me, so he is probably the crazy one. I do not hoard cats, but I do have a pretty good size nun collection.

Meet Whiskey
What is it like living with your human?
As humans go, she’s pretty good. You guys can be a despicable lot. Over the years, Mom, that’s what we call her, has become more than a meal ticket. 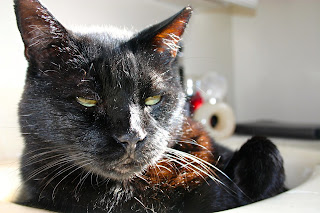 I sleep as close to her as possible to protect her. To be honest, I would like a little more room. Is half the bed really too much to ask? She also bleeds pretty easy when I’m on the prowl and her arm is the first prey I find. That’s a good quality.

One time I saved her from a raccoon. Yes, it was on the other side of a window, but those things are crafty. If I hadn’t been there, it could have picked the lock and come into the house.
How did you two meet?
Yawn, I first meet her when I was a kitten. She lived next door to a poor excuse of a man who I allowed to be in my presence. Her front door was open, and I darted in and stole a cat toy out of her living room. She chased me for a block. It was great fun. She’s totally out of shape, and I kept stopping to make her think she could catch me. The loser man moved three years later leaving me to live in the streets. People were mean to me, I was hungry, and then I was trapped and neutered. Sometimes I can’t even believe they are gone. I’ll be taking a bath and, boom, it hits me, I have no balls. Mom says it’s a good thing, but she has all of her parts.
Anywho, one rainy night, Mom opened the door and I was sitting on her doorstep soaking wet with a big sore on my head. I can be charming, so she invited me in. I gave her a test drive for a couple months, basic chores and rules, and 10 years later here I am.
Do you mind if I bite you?

How would you describe your relationship with Boris?
Not a fan. Do you have any treats? Mom keeps saying he is my brother; he is not. I once posted a note on Facebook asking people to help me find 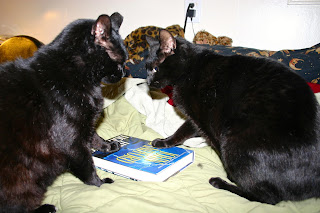 his real family. So much for social media, that pain is still living with us, following me all over, trying to sleep with me. So, what’s the situation on those treats?

What is the best thing about being a cat?
World domination is right around the corner. I am truly confident that it will happen in my lifetime. You will notice that I don’t have a comb-over, so this isn’t coming from narcissism, but pure facts.
I also really enjoy tuna.

As the older brother, what do you hope Boris learns from you?
First, we have established that he is not my brother. Have you seen how small his head is? But, I try to teach him things. Cats these days have it so easy. Back in my day, we caught real mice not these catnip laced store bought things. When I wanted to play with string, I walked uphill in the snow both ways to find some. Don’t even get me started on those newfangled laser pointers. We chased sunspots.

Meet Boris
What is it like living with your human?
First of all, Ashley, I must tell you how wonderful it is to meet you. Can I sit on your shoulders? Go stand about three feet away, and I will launch across the room and just when you are sure I am not going to make it, I’ll extend my claws and connect with your back. 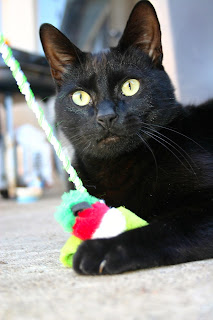 To answer your question, Mom is a work in progress. I’m really working on her training. Don’t get me wrong she is a great trampoline, a wonderful scratching post and, when she is sleeping, somehow she becomes the shortest path to anywhere. I just walk on her from head to toe anytime I need to get anywhere. Sometimes I stop and stand in the boob area, and ponder my existence or stare at the ceiling with a look of concern on my face.

How did you meet your human?
I was at this open-air adoption and no one was paying attention to me. All the other kittens with their fancy fur coats were being played with and told how cute they were. The humans would mumble something about being black and walk right by me. I didn’t know what that meant, but I wanted a home and to be out of a cage. I saw her walking by looking at the other cats. She even held one. I turned my charm on full throttle. I started clawing people through my cage as they walked by. They kept yelling “ouch” or “hey, don’t do that,” and finally she noticed me. She walked right up to me and said, “Do you want to go home?” It was probably the best day of her life.

How would you describe your relationship with Whiskey?
Awesome. He is so cool. I jump on him, I sit on him, I attack him and he is just crazy about it. Sometimes while Mom is sleeping, I wake him up, and we play next to 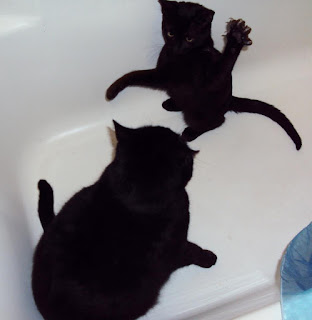 her on the bed. He throws me around, usually off the bed, swats at me and sometimes yells; it is the best. He lets me have all the toys in exchange for my share of the treats. I get the feeling that he doesn’t really like attention from humans, so if I notice it happening (believe me, I am always on the lookout) I step in and take one for the team. I can’t imagine a day without him.

What is the best thing about being a cat?
Oh gosh, so many things. Getting on the counters is one of my all time favorite things to do. I make just enough noise so Mom can hear me from the other room and right before she comes around the corner, I jump off. What can she do, I’m on the floor? Crawling through the blinds at 4 a.m. is another great one. You can tell when a human is asleep by how they breathe, so I wait until the right moment and crawl back out. Knocking over water bowls—WOW that is a rush.

What’s the deal with you and nuns? I hear there’s a history there?
Do I need a lawyer? You read the blog, don’t you? One time, okay five times, I may have hurt nuns. The last time, the one I am waiting trial for, I was on the fourth story of Bookcase Manor, a home for religious icons, and gave her a little shove. She was blocking access to the treats on the fifth story. The policed issued a warning that I was clawed and dangerous, and, as you can see, I am not. I’m a sweet little boy. I’ve already escaped prison once; I can’t go back man. Save me.

If you have anymore questions for Whiskey or Boris send them CatNoirCC@gmail.com or put them in the comment section on this page. 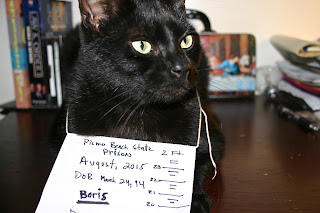 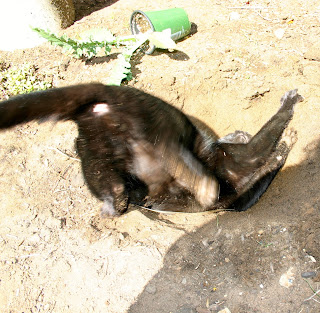 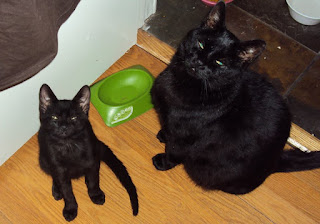 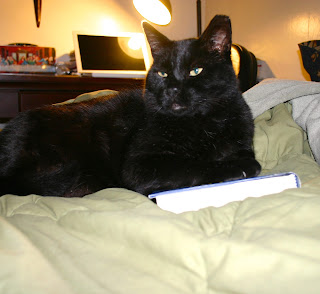 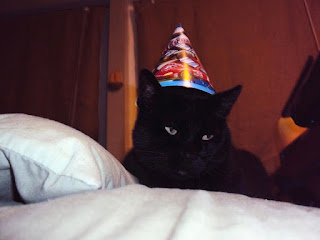 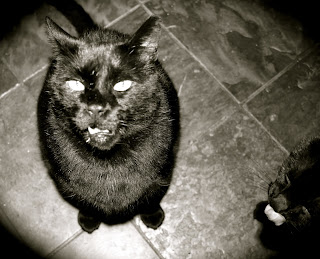 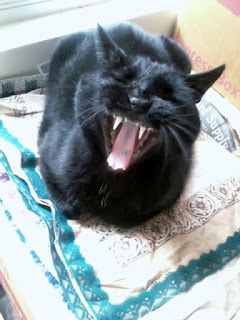 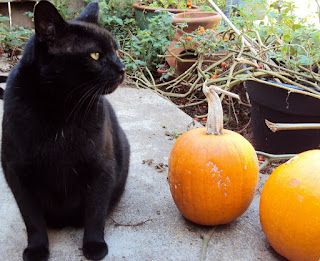